I'm very tired of unproductive mornings, I am SO not a morning person. So fairly early today, I took a flask of coffee down to the river and sat at one of the picnic tables at the Cutty Sark tavern and made a sketch, and wrote down an idea for a short story. The coffee made me really buzzy. I forgot to bring my thin pencil, and just had a fat nubby one. Which was kind of nice, because it forced me not to geek out over the small details and just draw the general scene. 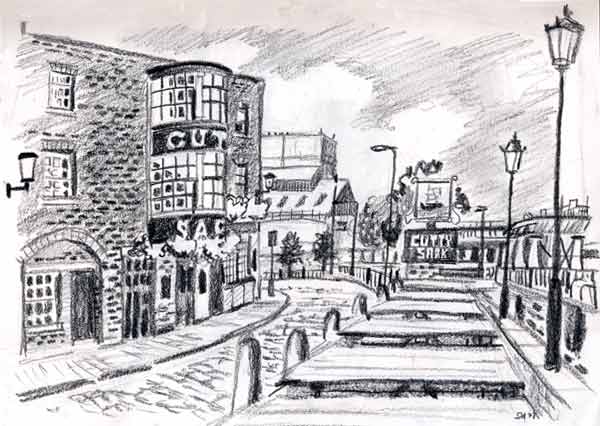 It was fun finding out who walks along that section of the river at that hour. I think I need to do this more often. The only problem is that there are so many fun things to do by the river that I'll have to be careful not to get caught up in something and stay all day, when I have paid work to do.

Ha ha, here's the winner of this year's Bulwer-Lytton award for worst opening line of a work of fiction:
Gerald began--but was interrupted by a piercing whistle which cost him ten percent of his hearing permanently, as it did everyone else in a ten-mile radius of the eruption, not that it mattered much because for them "permanently" meant the next ten minutes or so until buried by searing lava or suffocated by choking ash--to pee. That was by Jim Gleeson of Madison, Wisconson. Way to go, Jim!
Here's the winning entry for the children's book section:
Danny, the little Grizzly cub, frolicked in the tall grass on this sunny Spring morning, his mother keeping a watchful eye as she chewed on a piece of a hiker they had encountered the day before. - Dave McKenzie, Federal Way, WA

By the way, are any of you Livejournal people having problems with the comment e-mail notification feature? I have it set so that I get an e-mail when someone comments. But I only seem to be getting about one out of five e-mailed to me, and sometimes days after someone's left the comment. And I don't have one of these overactive spam filters or anything. It's not a big deal, because I check 'recent comments' most days, but I'm wondering why it's doing that.
Collapse