This sketch is dedicated to the lovely

iguanno, who gave me the idea from her post, where she holds up a beautiful old Mayakovsky book and quotes from this poem. (Here's the whole poem, and in Russian.) It reminded me of the fantastic Mayakovsky museum in Moscow, which displays gorgeous handmade revolutionary signs and the inside of the building is shaped like Tatlin's Monument to the Third International.

Here's a picture of me in my spiffing new gear as ship's illustrator for the Cutty Sark. I spent the morning getting a health and safety induction, then clambering up and down the decks of the ship with my camera and sketchbook and chatting with the construction crew, then going around to the warehouse workshop near the power station. It's great, I would've been nosy about the Cutty Sark anyway, and now I can do it with an entrance pass! 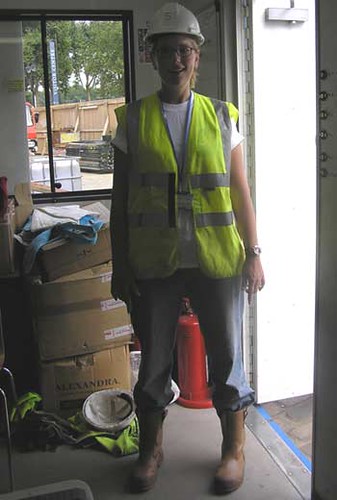 I'm not allowed to post any pictures of the ship until they're authorised, but you can see a handy-dandy fire extinguisher on the floor behind me. I noticed that there are a lot of those lying around.
Collapse