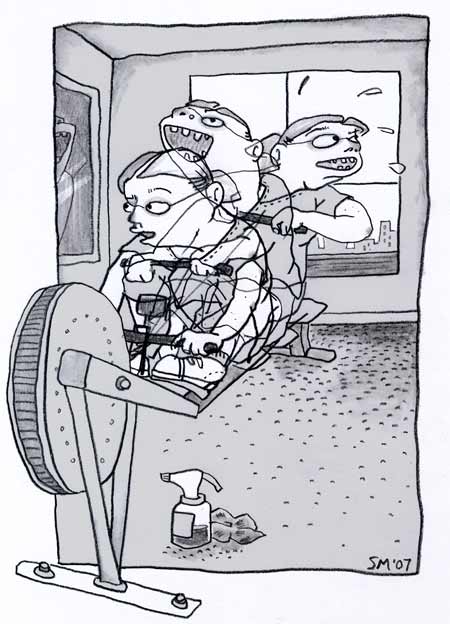 I went to my first rowing practice last night. It was great! Everyone was really friendly and helpful and now my arms are killing me. There were three other newbies like me, and this older guy named Alan showed us round the boathouse (he'd done up some of the boats himself) and taught us stuff about the boats, then instructed us in proper rowing technique on the machines. Normally I hate gym machines because they make me feel like a hamster, but the rowing one is okay. It's kind of fun when everyone gets going together. There was this Action Man doing it across from me, so I could kind of copy what he was doing and get into the rhythm of it all. (I was going to draw all of us rowing, but it would take Jack Kirby to draw that guy.) Next practice we're going in 'the tank', then we'll head out on the river. It's all very exciting.
After Alan left, one of the newbies had to run back to the babysitter, but the remaining three of us went next door to a cosy corner of the Trafalgar tavern and partook of some London Pride. (It's an old pub that gets a mention in Charles Dickens' Our Mutual Friend). I think I'm going to like this!
Collapse