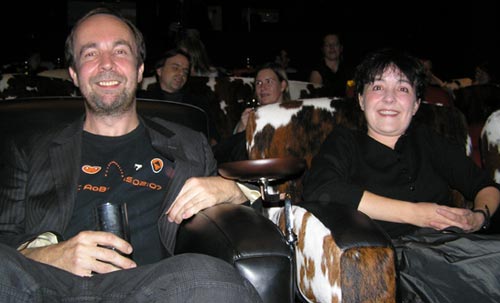 I had a great time last night at the Soho Hotel, where the brilliant Studio AKA and Templar hosted a launch for Marc Craste's first picture book, Varmints, written by Helen Ward. Marc showed us some of the finished clips from the 22-minute animated film coming out next year, based on the book. The book is beautiful and the animation bits were amazing! Designers are going to go nuts. If you haven't seen his Bafta-winning film, Jo Jo in the Stars, you can see a trailer on the StudioAKA website. Here's the picture I took of Marc and Helen in the fabulous cowhide chairs in the screening room, and the review I wrote of the event. (The two people in the photo's background are the editors of Illustration magazine.)
edit: Here's my Varmints book review

And just to top off a good evening, I was stumbling out of the hotel and met Pedro Almodóvar, who was very sweet. He signed my notebook, which at first I thought read 'lots of killer', but which, on closer scrutiny, says 'lots of kisses', hooray! 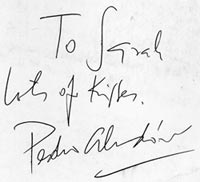 I wrote a review of Chris Van Allsburg's latest work, Probuditi!, a book which really puzzled me, coming from the author of The Polar Express and Jumanji. I so wish I could have heard the decisions being made at Anderson Press to take it up. Did anyone who's seen that book figure out what's going on there? I have a feeling it's not going to be made into a major motion picture. Here are my comments on it.
Collapse