We don't have red fire hydrants in England, pity. We have red post pillarboxes and red phoneboxes, but neither has the same iconic status as an attractive dog magnet.

My friend Annika got free tickets to an evening of 'avant-garde music and video' at the British Library. Avant-Garde can be cool or downright awful, but this was actually pretty good. Before the concert started, they had some really beautiful manipulated old film footage, with traces of added colour, projected at interesting angles around the huge atrium. Even better, after we got a little tired of the music, the library left the exhibitions open, so we saw two great shows: One was 60 Years of the Folio Society (until 20 Jan) with a large and amazing display of beautiful book covers and illustrations by people like Edward Bawden, Paula Rego, and one of our former tutors, Chris Brown. There was this fabulous Agatha Christie cover that Annika took a photo of, so I'm going to badger her to send it to me. The other exhibition was Breaking the Rules (until 30 March), a display of early avant-garde printing. Great lettering and textures. I recognised some of the Russian books from the exhibition (cool website!) a couple years ago at MOMA in New York.
We also stopped for a glass of champagne at the opening of the Winter Exhibition at the Illustration Cupboard and saw Shirley Hughes and got to talk with Axel Scheffler for awhile. He looked very well put-together, considering he was working to some tight deadlines and has a five-week-old baby. He mostly sells original artwork with Images of Delight.

edit: I just adapted this for this year's Christmas gift tag!

My Christmas cards for the Cutty Sark have just gone on sale! They feature three of the figureheads from the collection making merry in storage. Their names are Nanny (the Cutty Sark's own figurehead), Lalla Rook and General Gordon. You can buy card packs of 5 either in the tent by the ship or in the ONLINE SHOP, and they're happy to deliver in the UK or internationally. Buy lots, since all the proceeds go to preserve this famous clipper ship! 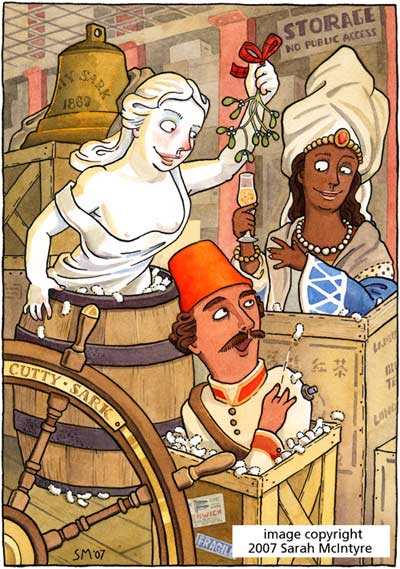