We had good fun at our comics panel for the DFC at the Bath kids lit fest on Saturday. Here's Bob Etherington (writer of Monkey Nuts) basking in the joy of the liquorice allsorts jar and lava lamp luxury of the VIP lounge. Apparently comics people don't usually get VIP lounges, so we thought we'd better document it.

I got to meet Vivian French in the lounge, which was cool. (She wrote a book called The Thistle Princess, which was beautifully illustrated by my first illustration teacher, Elizabeth Harbour.) The Bath venue was SO lush, this huge room with giant chandeliers and an intimidating sea of seats. (I'll post photos later, they're in my dad's camera, which doesn't seem to load to my computer.) We had a good turnout and the kids there asked really perceptive questions about making the comics, I was impressed. Here we are in the pub afterwards: me, Bob Etherington, Lorenzo Etherington (Bob's brother, who draws Monkey Nuts) and John Aggs (who draws John Blake for Philip Pullman and writes The Boss): 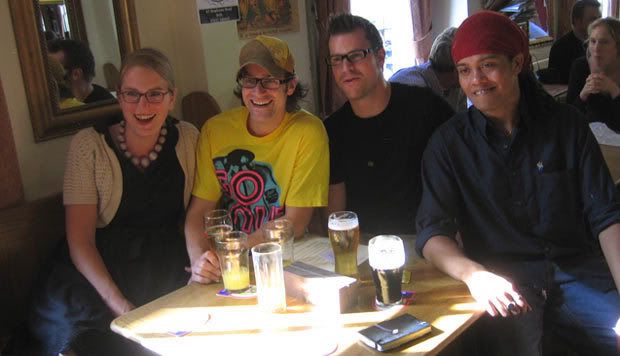