I was running errands and getting my coffee this morning in Greenwich and ran into a pack of 30 or so French bikers and had to stop and admire their bikes.

I'm not into motorcycles myself, mainly because my mother's side of the family were really into biking and two of my uncles got in horrific accidents and one of them was never quite right afterward. (Although my grandma looked pretty cool biking to work with her dangly earrings whipping in the wind.) But as bikes go, man, these were real lookers! So I got to practice some of my terrible French and take photos, and one guy insisted I sit on his bike and he take a photo of me, so here you go.

I'll post sketches later, but right now I'm running around like a crazy person trying to tie up loose ends before I go to America. (Hanging out with French biker dudes was a necessary part of the checklist, of course.) Sadly, I do not look very chic on a bike. 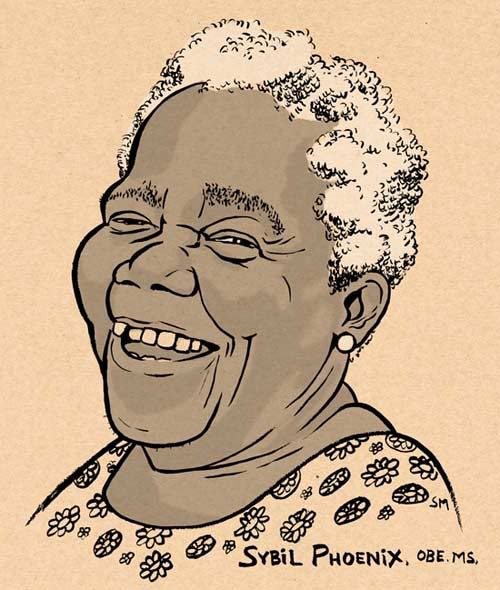 I'd been pestering Woodrow Phoenix for ages about meeting his mum, ever since I heard about all the amazing stuff she gets up to. I swear, this woman is probably one of the most remarkable people on the planet, fostering over 200 kids, setting up a house for homeless girls and doing about a zillion other things. She's played a part in almost every bit of our local history I've ever heard about.

So I got a phonecall from Woodrow mid-Saturday, saying, if I wanted to meet his mum, she was having an 83rd birthday party, and right then would be a good time to come over. So my little neighbour friend and I trundled up the road and got to meet this remarkable woman. Hooray!

We drew on a map in my neighbour friend's sketchbook, showing Mrs Phoenix's birth country of Guyana, and a few other places we talked about, including Seldovia, Alaska. Seldovia's where I am going with my family, to stay at my uncle's house. So I'll be off the blog for awhile because there isn't any internet there. In fact, there aren't any roads there, it's just bears and whales and halibut. I'm stopping by Seattle first to see my sister and Mike and meet up with some of the lovely comickers there, including

mr_sadhead. Hopefully I'll have lots of sketchbook items to post when I get back!
Collapse