Saturday was very full-on, I ended up working a 16-hour day and almost falling to pieces. So it was great on Sunday, going out to the pretty town of Godalming in Surrey with Stuart to visit friends we knew from when we lived in Moscow. Since two of the kids are Stuart's godchildren, we've had them subscribed to The DFC comics magazine and they've been sent most of my books and a lot of my friends' books over the years. (This Christmas, I think The Rainbow Orchid, Mo-Bot High, Monkey Nuts, Mezolith, Tall Story and Fever Crumb featured prominently.) And funnily enough, they're all very big comics fans!

After lunch, we had a great time at the kitchen table, drawing, making comics and generally mucking about. Here's a portrait I did of Jamie. He loves The Avengers, just like my studio mate Gary Northfield. (Sometimes Gary gets me to buy his Avengers when I go to Gosh! and I always say, They're not for me, they're for Gary! and they say, Yeah, right.) 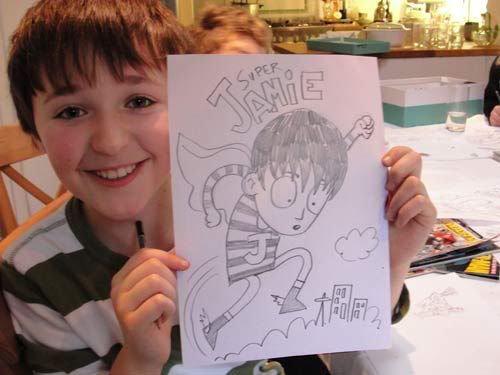 I think I was supposed to go have coffee with the adults, but I hadn't been doing morning sketches for the last week and the thought of doing silly drawings was too tempting. It's nice drawing stuff when it doesn't matter if it looks good.