Whoo hoo! What a fabulous day, look what just arrived in my Inbox from Cleveland-based comics artist Nigel Dobbyn! Vern and Lettuce (and me, ha ha!) are chuffed to bits to have two more pages for The Pickle online magazine! I'm sending them off to Serge the Ferret to put into The Pickle, but I just can't wait that long to show them to you. Aren't these brilliant?!

I love how he draws the characters, that Vern in the second-to-last panel is even better than I'd draw him. :D And Lettuce, and the mole, and that great mummy cat, and the bunnies...! Happy day! Thanks so much, Nigel!!! **Squee!!!**

I've had a couple friends in America (California and Wisconsin) get in touch to say that You Can't Eat a Princess! has been featured in Parents magazine. Which I'm starting to realise is a very big deal. The American edition comes out on April 14th, and it's published by a different publisher, part of Penguin, called Price Stern Sloan (more info about the book on their website). 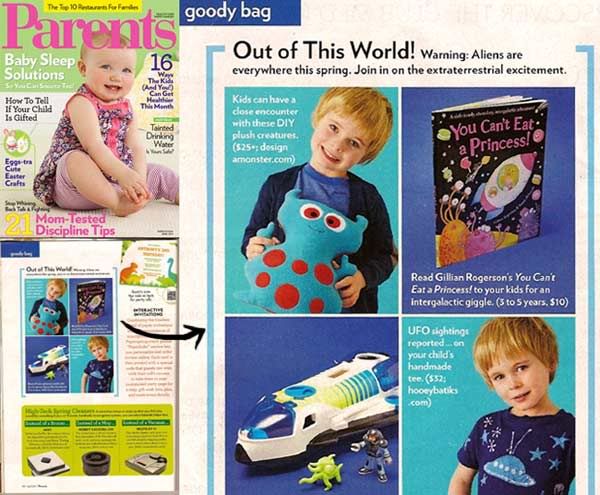 Thanks to my childhood buddy Sarah Knofel Mangum in California for sending this!

It's fascinating to see which publishers in other countries pick up my books, and right now it's all happening at the Bologna Book Fair! We're all biting our fingernails hoping lots of foreign publishers will want to buy what's called 'co-edition rights' to publish our books in their own countries. Nerve-wracking! But it's so cool when I get to see them printed in different languages. Here's my blog post and photos from when I went to the Bologna Book Fair a few years ago. You can see what's happening live on several Twitter feeds, including Bologna11, #Bologna and #tocbologna. (You don't have to sign in to Twitter to read them, just to post.)
Collapse