I knew we'd be drawing LOTS OF MONSTERS with LOTS OF KIDS in Dublin, so I did some limbering up by drawing my own monsters before the event. (Thanks for leaving such fab pens at the lodge, Children's Book Ireland people!)

When I arrived at the Green Room at The Ark, I could tell they were a comics-friendly bunch by their selection of tea mugs.

We started out indoors with the kids, giving them some basic comics-making tips, and having them help us design a monster character all together. Here's Steve drawing a curly monster moustache. Monsters are great for coming up with new characters because no one can tell us that we've drawn it wrong.

And then we went outside to Meeting House Square, and all 90 of the kids drew comics on huge rolls of paper! 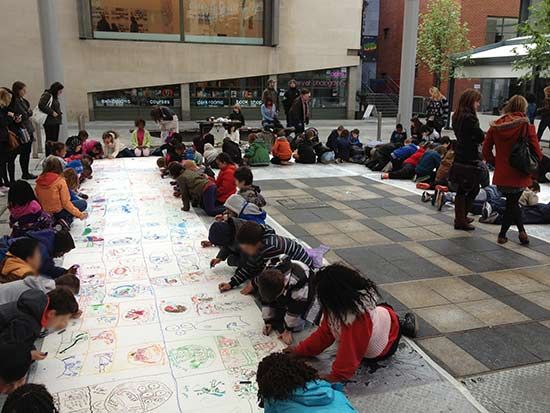 It was wild, it was awesome! I'd never led a Comics Jam session that large before, and we made up a template to keep things simple:

1. The kids marked out their drawing territory with a box.
2. They drew a dinner-plate-size circle at the top of the box, one hand-width down from the top line of their box.
3. Monster time! They designed their monster inside the circle. Some of them added a pet or sidekick friend for their monster.
4. They wrote the name of their monster above the circle, and I encouraged them to do it in lettering that tells us something about the monster (hairy, slimy, spotty, etc). If their monster had a sidekick friend, they named the friend, too.
5. They drew a line under the circle and divided this big square into four boxes.
6. They had 8 minutes to start off the comics story in just the first panel. (I encouraged them to make something bad or embarrassing happen to their monster, so the story would have to go somewhere.)
7. We counted down the last ten seconds and then called 'PENCILS IN THE AIR!'
8. Everyone rotated one comic to the left and read the new comic in front of them.
9. They had 8 more minutes to pick up where the last person had left off in this new story and continue it, just in panel 2.
10. We did the same for panels 3 and 4, and at the end, they got to go back and see the original comic they'd started and see what adventure their monster had gone on while they were away.

Speaking of comics, one more thing: When I arrived home from Dublin last night, I found new paperback copies of Vern and Lettuce waiting for me! I've designed new covers for the paperback edition and I'm really pleased with them. You can buy the book in hardback now, but the paperback will come out this autumn (a little early for the Edinburgh Book Festival). You can read their magazine, The Pickle over on my website.

And Dublin! Keep an eye out for my fabulous studio mate, Gary Northfield, who will be arriving in September to take part in Dún Laoghaire's Mountains to Sea festival. Before he arrives, get a copy of his new book, The Terrible Tales of the TEENYTINYSAURS, and see what awesome comics he makes!

And you can see us talking on RTE2's Elev8 show here.

Spending almost a whole week with Frenchman Hervé Tullet for Dublin Writers Festival got me thinking lots of new things. Such as... how I'd look in thick, round specs. But also it made me want to push myself in a few different ways, like focusing on the conceptual side of my book as much making nice pictures. Hervé and I have a very different attitude to painting; I love making pictures, whereas he loves coming up with ideas and then quickly filling in the necessary images to make the ideas happen. His artwork can look a lot messier than mine, but his mental process is much cleaner.