It's super-handy when my book comes out just as my mother's having her birthday. I made her this tattooed sailor lady card out of cut paper:

There's a little bit of my parents in the story's Mr & Mrs Crisp. Both couples love traveling and are fairly fearless. Here are the front endpapers of Oliver and the Seawigs, showing some of their adventures before the story begins.

I tried to give the parcel a Seawig-ish wrap job, and protect it with some old book covers, but it did come out looking slightly odd.

In the meantime, there have been about a billion and one things I've needed to do in the run up to the book launch. Like translating the 'Style your own Seawig' activity sheets into Dutch! A Dutch lady visiting my studio cracked up at the word 'knutsel'; she says it's a lovely word we don't have in English, all about crafting and hand-making and cosiness. And Saskia Kalter at our Dutch publisher, Veltman Uitgevers, told me that 'Zeepruik' is 'Seawig' and 'Watch out for Sea Monkeys!' is 'Pas op voor de zee-aapjes!'. Cool!

So excited that the Netherlands will soon be getting Olivier en de Dwaaleilanden! You can follow Veltman Uitgevers on Twitter as @VeltmanJeugd and @VeltmanUitg, and our fab Dutch translator Sandra Hessels at @creativedifrnce.

To say Philip Reeve and I were excited about taking Oliver and the Seawigs to the Edinburgh Book Festival is a bit of an understatement:

Here's a doodly recap of some of the amazing things that happened while we were there.

I didn't bring The Giant Seawig - it's a bit tricky for travelling - but I did make another wig which was smaller but more tentacled.

And when we arrived, I discovered that Neil Gaiman is rather fond of tentacles. 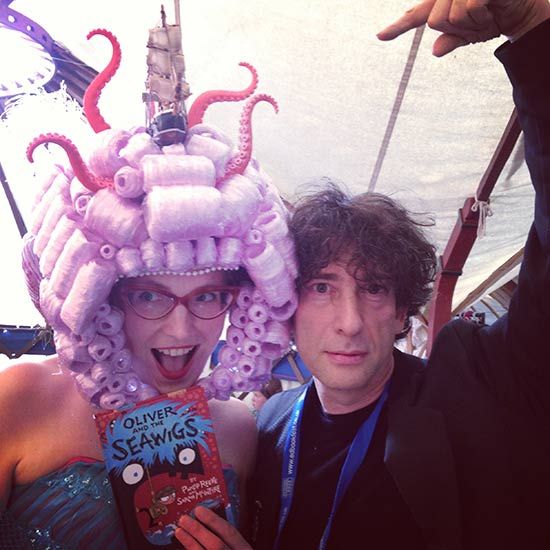 Enough to let them sprout on his own head. Awesome.