I'm a big fan of artist Grayson Perry, who has been delivering a series of four lectures on BBC Radio 4, called The Reith Lectures. Today's lecture was so good that I made Stuart listen... and then drew a picture of him in our lounge, musing on the subject:

Go listen to the four talks if you can. Grayson Perry is a rare combination of so many good things: a proper hard-working craftsman, an innovator, a good speaker with a sense of humour, a businessman, a very sensible person, and a showman with a wonderful sense of dramatic flair. A lot of what he says applies to working in the field of illustration, and I might write more about that later. But for now, just go have a listen. (You can even read the transcripts online, but the audio versions are more fun.) 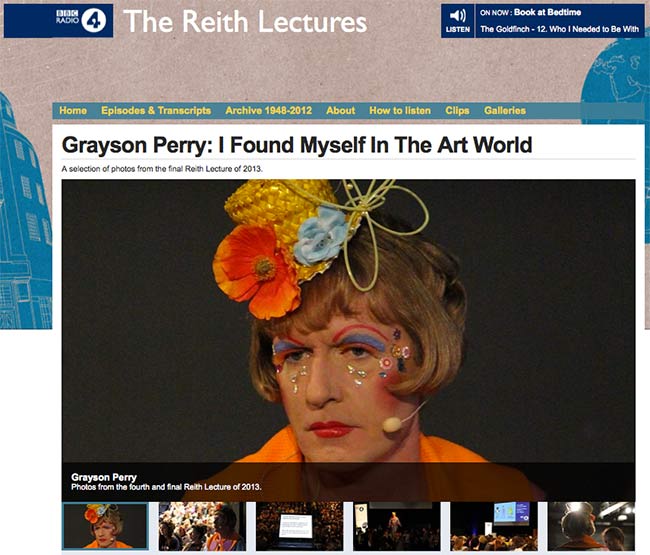 You can also read an earlier blog post I made about Grayson's exhibition of tapestries, The Vanity of Small Differences. I would SO love to do a project or a children's book stage event with the guy some day, but I would need a few months to get my frock and hat together, so as not to be upstaged. Oh, the flouncing!

I met Grayson once and spoke with him briefly about his tapestries; I hadn't actually gone to see him, but his wife, Philippa Perry, for the launch of her book How to Stay Sane. (She'd previously written a comic book, which was how I knew of her.) I had a funny moment of self-realisation, that I wasn't as socially adept as I thought I was. I'd been so used to swanning into children's book events and knowing lots of people, and everyone being super-friendly, mucking about drawing pictures of bums and farts, air-kissing - la la la - that I started to assume all events would be like that. I was so confident that I didn't take a friend, and wore a rather ridiculous dress. When I got to the bookshop, I realised that the only person I knew (a little bit) was Philippa, and of course you can't monopolise someone at their own launch. And everyone else seemed to be nervous middle-aged women who absolutely didn't want to talk with me. It was very humbling. I got my signed copy and after about ten minutes of attempting chit-chat with uninterested strangers, raced off, back to cosy children's book world. ...Ha ha, I'll do better next time I go to a serious book event for grownups. (You can follow Philippa on Twitter at @Philippa_Perry.)
Collapse