Today I visited a Haugaland vocational college in Haugesund, on the Norwegian mainland and made lots of pug-themed comics with 16- and 17-year-olds there. Here's a quick-draw comic I made on the flipchart:

To be honest, of all the week's events, I was most nervous about this one because of the age range; kids this age can be very sensitive if they feel they're being patronised in any way, and the last time I worked with Norwegian kids this age, they were quite sullen and wouldn't say anything at all, even if asked a direct question, for fear of speaking poor English in front of their classmates. But this time it was a lot better. The students weren't obvious candidates, studying hairdressing, interior design and other things not entirely connected to illustration, but they were much better humoured. 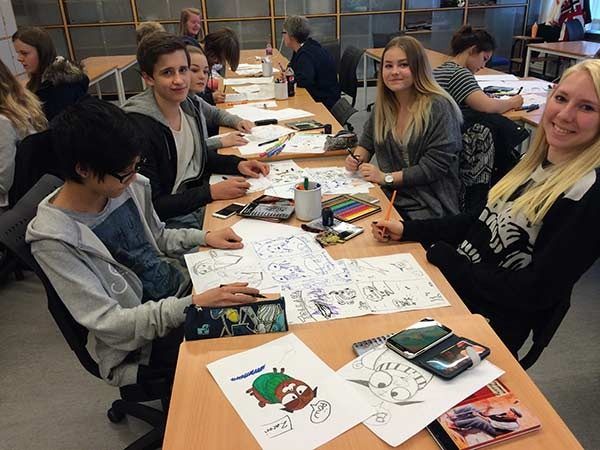 All but one or two of them wouldn't volunteer any ideas, but at least they didn't glare at me or get upset. And when I asked if anyone had any questions, they didn't, until class was over, and then a small core group of them came and talked with me privately, and turned out to be quite enthusiastic, and very interested in illustration and comics.

So I went away feeling much better about the day, that I hadn't been wasting time on them. We kept the subject matter quite light; I didn't want them to take their comics too seriously and stress out about them.

We did the same Pugs of the Frozen North activities that I'd done on previous days with younger kids, but I figure it's something I'd have fun doing even as an adult, so I stuck with it.
( Collapse )
Collapse