This year's been a busy one! I thought I'd do a roundup of the books I've worked on this year, and a little peek behind the scenes, and who made them happen! 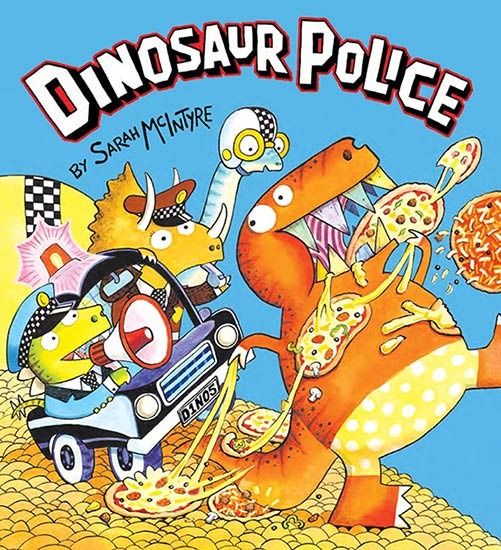 I'd had such fun drawing sharks with BIG TEETH for There's a Shark in the Bath that I thought it would be fun to do something else with BIG TEETH. And dinosaurs were the obvious choice because I was dinosaur-crazy as a kid. And I also liked to build little worlds out of LEGO. So I got to build a dinosaur world! Here's some of the original artwork on my desk, painted in liquid coloured inks:

Combining dinosaurs with police was my editor Pauliina's idea. Her son was really into cops and robbers stories, but she hadn't seen a lot of recent books on the subject. And we were getting so much bad press about cops from US news stories, that I thought it would be great for kids to see cops in a good light, doing what they should be doing, so we get good sorts of people going into the police force, not people who as kids learned that it is a free place to be a bully. Here's how a page happens, from a 'thumbnail' doodle, to a pencil rough, to a finished painted page.

And here's just a small part of my Scholastic team! But these are the people I worked with most often: designer Rebecca Essilifie, editor Pauliina Malinen, and publicist David Sanger, who was wonderful on stage at festivals in Hay and Bath as DINOSAUR DAVE. (Click here if you want some free Dinosaur Police activities from my website.)

My friend and former studio mate Lauren O'Farrell (aka Deadly Knitshade) is always great with the extra fun stuff! Not only did she make an awesome dinosaur fascinator for the launch of Dinosaur Police, but she designed, knitted, and wrote the pattern for our Pugs of the Frozen North pug! (You can download the pattern from my website here.)

My artist friend Eddie Smith was a big help with costumes, designing my Dinosaur Police hat! (Full costume photo by Jay Williams for The Telegraph.) And here's tailor Esther Marfo sewing my costumes!

Which leads us on to... PUGS OF THE FROZEN NORTH! Everything to do with this book has been pretty epic.

2nd photo by Jody Lawson, third photo by Anna Gordon for The Guardian.