Disney gave The Guardian newspaper some money to commission illustrations reimagining The Jungle Book, so thanks to editor Sian Cain, Philip Reeve and I jumped in! You can see it online here. Visit the links to see how other people have illustrated it! 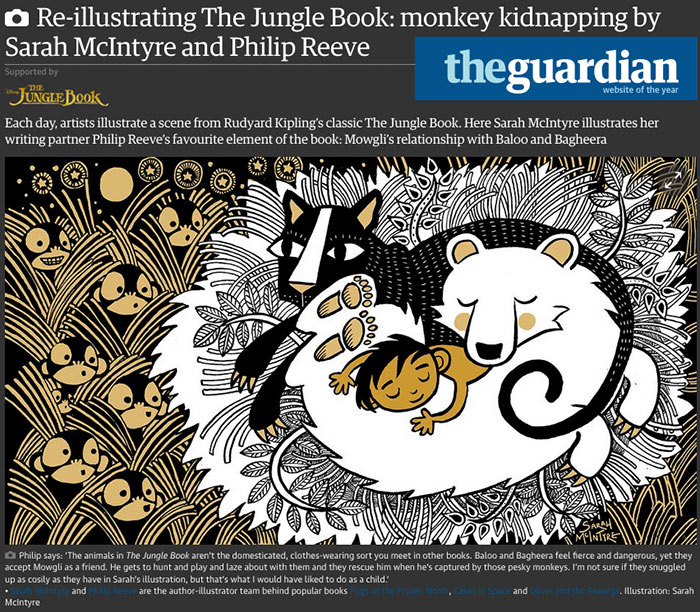 It must be forty years since I read The Jungle Book (I never saw the classic Disney version as a child - only a couple of clips which were forever turning up on Screen Test). A lot of the detail of the story escapes me now, but there are a few scenes which must have made a deep impression, since they still spring vividly to mind; Akela and the council of wolves deciding little Mowgli's fate, and the overgrown ruins called the Cold Lairs where the moneys live. But my favourite element as a child was Mowgli's relationship with the bear Baloo and the black panther Bagheera, which I think is at the heart of the book's appeal. Most children love animal stories, but the animals in The Jungle Book aren't the domesticated, clothes-wearing sort you meet in other books of the period. Baloo and Bagheera feel like real animals, big, and fierce, and dangerous - yet they accept Mowgli as their friend; he gets to hunt and play and laze about with them, and it's they who come to his rescue when he's captured by those pesky monkeys. I'm not sure if he snuggles up with them as cosily as he has in Sarah's illustration, but that's what I would have liked to do.

And here's the trailer for the new film:

Uh... did you see Johnny Depp and his wife saying sorry for smuggling their pet dogs into Australia? It was a bit strange.

Well, I'm doing a Pugs of the Frozen North book tour of the Scottish Highlands in May, and Scottish Book Trust are already issuing their own apologies...