I've been getting a lot of e-mails recently from people wanting me to illustrate their books. They tend to be people who have come up with their first story, tell me they love my work, and are keen to get things moving. That seems sensible and I applaud them taking initiative. I think it's awesome when people love books enough to want to create their own and I feel honoured that of all the thousands (tens of thousands?) of illustrators in Britain, they want to work with me.

This all sounds very positive. But there's a hitch: the strange thing is that, if I take time to write a thoughtful explanation of why I can't illustrate their book, and point them to helpful links, the best I usually get is a curt reply, almost never thanks for my time. Often I'll get a nasty response. It makes me think I've shattered their dreams and I ALONE am responsible for this and should feel guilty. (I never write a second reply to these.) But I wonder if it would be better not to reply in the first place; it's an awful feeling, putting time into trying to do something right, with the only result being that I annoy someone. Yikes! 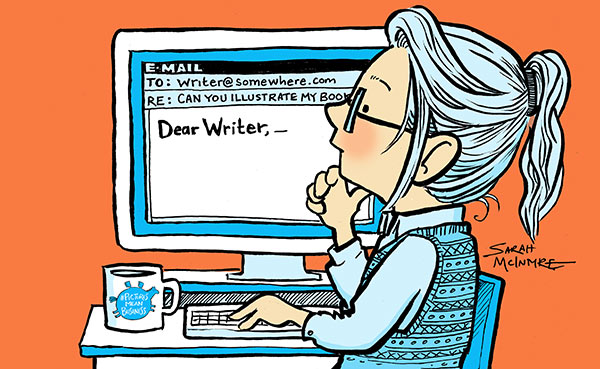 I tend to hear from three different kinds of writers:

1. The Chancer penned a little ditty last night and read it to their kids, who loved it. They thought, 'Hey, that was easy, why not try getting it published? Get rich as JK Rowling?' You wouldn't believe the number of people who find out I'm an illustrator and immediately ask me to illustrate their book before they've even written a story or seen any of my work. I might illustrate medical textbooks for all they know.

2. The Life-Goals Hopeful has been fantasising about being an author for years and years and hasn't done much about it or done any research into the industry, but has been working on building up the sheer nerve to make a first move. It's such a big thing, getting over their lack of confidence that they put all their hopes into this one approach to the illustrator. These people can be quite scary, because anything I write to them will be taken on a profoundly personal level and they'll feel crushed by anything that isn't an enthusiastic YES to whatever they're asking. Once they decide to act, they act fast and recklessly (in case they lose their nerve) and almost never look at the things I've written for them on my website (the Contact page, the FAQs). They're so excited by their own bravery that they don't make any attempt to see their actions from another person's perspective and can come across as needy or aggressive. (It's not all about self-belief, think about other people, too.)

3. The Thoughtful Business Person is the most likely to get published and the most rare: a person who has been thinking about getting work published for quite some time, has researched the industry, has a good sense of the other new books on the market that are similar to the ones he or she wants to get published, has tried their best to get to know other people in publishing (often through the Society of Children's Book Writers & Illustrators). This person understands the work's creative but also a business; they take any news from me professionally and express gratitude for any time, tips or constructive criticism I give them. I often run into these people later at events or book festivals when they're promoting their newly published books and it's a pleasure to hear how they're getting on.

So why am I writing this?

You might be a writer who's hoping to get into the business. As a writer, your job is empathy, writing things from other people's perspectives. What I want to point out is that, if you want to achieve any success, you need to apply this skill - having empathy - with the people you want to work with. I can empathise with you: I've been in that position of wanting to get into publishing but not quite knowing how to go about it and making mistakes. But sometimes people gave me advice that helped me not make too many mistakes. So here we go, I thought I'd better explain how the business works and maybe help you see a few things from an illustrator's perspective. If you've written to me, I might have sent you a link to this blog post.

To start with, there are several reasons why I probably can't illustrate your book:

1. You don't actually need me: if you're a good writer, you're in luck! There are fewer good writers than there are good illustrators. Unless you've started out with a partner who's integral to what you're making (like I did with David O'Connell and Jampires, or Philip Reeve and Oliver and the Seawigs), you don't need to find your own illustrator; your target publisher knows lots of them. (My agent will back me on this, and I've been successfully paired with Giles Andreae, Gillian Rogerson, Claire Freedman, Anne Cottringer and Alan MacDonald, none of whom I'd previously known.) Editors and art directors don't just take your book and print it; they're active in creating it with you. Part of their job, and what they pride themselves in doing, is matching you up with the illustrator who's perfect for your story. If they've never worked with you AND you're pulling along an illustrator they've never worked with, that's two unknowns for them, and that's a much bigger risk than taking you on and pairing you with an illustrator they know does good work and meets deadlines. Read the Writers & Artists Yearbook (updated annually, often available at public libraries) and learn how to put together a very professional looking manuscript and cover letter. SCBWI Conferences are packed with helpful seminars, and their quarterly magazine (which you get with your membership) has helpful articles. Having done your research, you'll know exactly which editor to send it to, by name. And yes, this does take time.

2. Career illustrators can get scheduled tightly to book fair deadlines. We'll have a contract agreeing to have, say, a picture book ready for Bologna Children's Book Fair. We'll have another contract to have a picture book ready for Frankfurt Book Fair. Maybe we even have another illustrated chapter book due for Bologna. For the amount of time I take to illustrate, I can confidently do two books in a year; three books pushes me to the breaking point. Even if an illustrator wants to work with you, the scheduling means your book with them might not come out for three or four years. You can read this in-depth blog post about what career illustrators (and writers) actually do for a living. I estimate that I only get to spend about 30% of my working time actually illustrating books.