I was away all weekend doing book-festival-related work in Manchester and didn't have much time to follow social media, but whenever I had a brief chance to dip in, I'd get hit with a massive wave of people's despair over the EU Referendum results. It felt like people were whipping themselves into a frenzy of thinking we were in a dystopian apocalypse like something you'd read about in The Road or The Hunger Games. People were saying we'd destroyed our children's future. 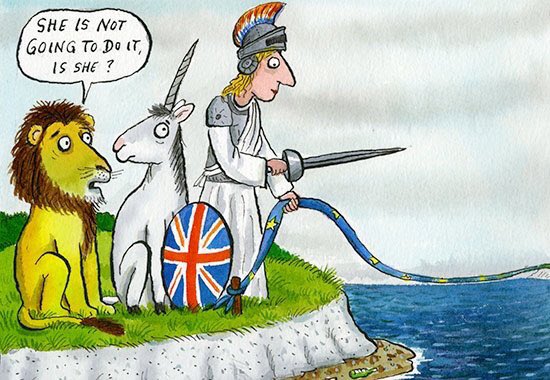 I was gutted; I'd voted Remain and I couldn't see how our country would go forward with a Brexit strategy, if it had one at all. (And it turned out no one DID have a strategy.) The economy is taking a big tumble. I ran into an old friend in a coffee shop who runs a building company, and he and his wife were having a very hard, worried discussion about what they were going to do now about their investments and contracts they were about to sign.

But the fact is, unless we've sterilised everyone in Britain and killed everyone under the age of 18, we haven't destroyed our children's future. The future's not some puddle that we can stamp in and muddy; that's called the present. The good thing about the future is that we're not allowed to touch it, it's always ahead of us, and we will change and adapt to survive in the years ahead. Of course our children will have 'futures', even if they're not quite what we would want for them. Maybe they will do some things better than we did because our generation were too narrow-minded to see certain options.

In the meantime, we can make a positive impact on the children around us, the Leave vote's not going to stop that. Authors I know are visiting schools all over the country - even this past weekend - inspiring kids to create their own stories, think up new ways of seeing things, empathise with other people, try to imagine a better future than the present they're living in. 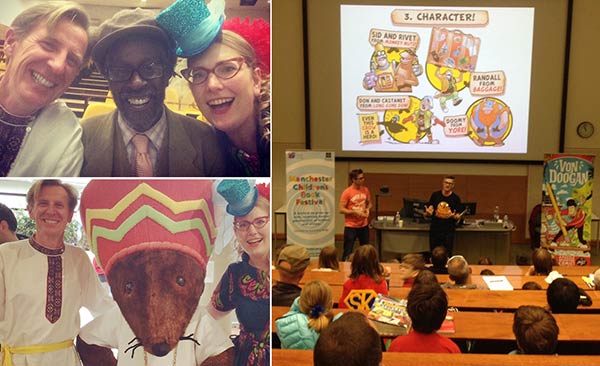 I was listening to a swimming instructor this morning giving kids confidence to float. I visited the Royal Manchester Children's Hospital over the weekend where hospital teaching staff were thinking of creative ways to help children learn, whether they were in hospital for three days or three years. And a charity called Readathon UK were providing them mobile library shelves so sick kids and their families have something to read. 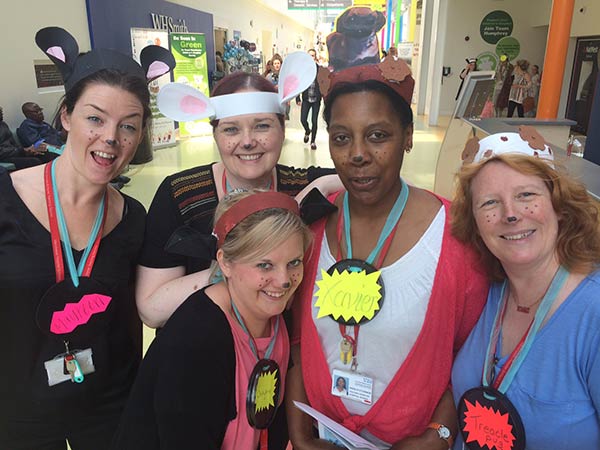 These things are still happening and we can fight for them to keep going. Most importantly, parents, relatives and foster parents still love and care about their kids and want the best for them; that hasn't changed with the vote.

People are saying our country is wrecked. I've lived in the USA (for 21 years) and in Russia (for two years) and I can confidently say that we do some things much better than those two countries. In fact, I love this place so much that this is where I've chosen to stay (and I'm incredibly grateful to have had that option). I love the way in Britain that we value our history; it's written into the literature and fabric of our communities and we treasure and meticulously catalogue it so we can learn from the past. I love the landscape, I love its people's sense of humour.

But any country is like a family: we have embarrassing Grandpa Jo who keeps touching lady's bums. We have annoying Aunt Hazel who won't stop making vile jokes about the Nigerian neighbours. But unlike a country, we know everyone in the family pretty well: we know Grandpda Jo has dementia and isn't quite in control of what he does (which doesn't make it any less embarrassing, but he's not getting any better). And we know that Aunt Hazel got badly bullied by her classmates as a child and then by her partner, and always lived on the same road that's different now than it used to be; being racist is her attempt to have some control over her environment. It doesn't excuse what she says, but we do our best to try to help her see why what she's saying is incredibly unhelpful to everyone. Sometimes we get into big arguments with her and it takes awhile for the relationship to mend. But we look after her daughter: we have discussions with her, lend her books and watch movies with her, take her 'round to meet the neighbours (who have a kid her age), and help her see that there are more ways of seeing the world than the way her mother sees it, that she can make choices. Sometimes we learn unexpected things about Britain's history from Aunt Hazel, who's lived longer and seen things changing. We don't brand Joe and Hazel 'evil' from a safe Internet distance, we get on living with them as best we can.

I see a lot of good things happening in Britain. Last weekend I saw London Mayor Sadiq Khan standing firmly with the people taking part in the London Pride march. That guy's putting himself in a lot of danger from people who might see him as a traitor to his religion, but he's not letting that stop him. 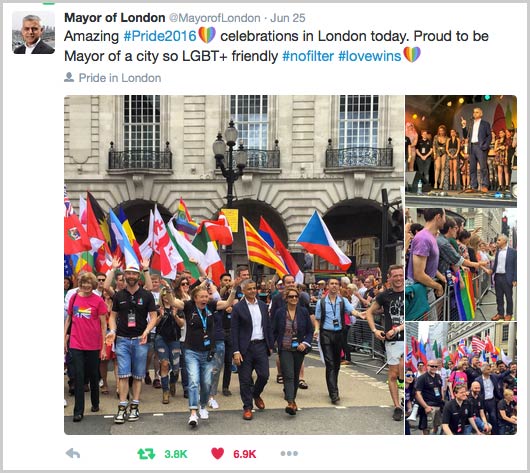 I saw activist Peter Tatchell tweeting an article about the Pope, who says it's time for the Church to apologise for how it's treated gay people. Yes, the Church is massively messed up, but it's wonderful to hear its most influential member trying to turn it around. And sometimes we have to learn to speak to religious people in their own language; just yelling louder won't make them understand. To do this, we have to listen to people of faith who care deeply about social justice issues and aren't afraid of healthy debate. Don't ignore everything they say just because you don't believe in God or their particular religion. Or if you do, don't be surprised when they don't listen to you or vote as you would like them to. 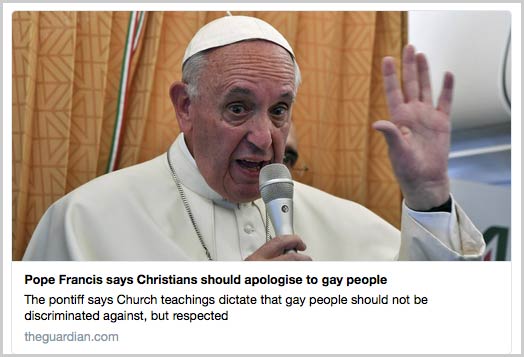 And racism. Not all people who voted Leave did so for racist motives, but many hardcore racists seem to have taken the vote as validation for ugly words and behaviour. Racism isn't anything new, but the recent turmoil is making us re-examine who we are, hopefully listen to people from other backgrounds, and listen and discuss with them what's important to make our society function as harmoniously as possible. Listening will be a big part of that. And we don't always have to jump in immediately to show everyone we're not racist; sometimes we just need to listen and help those people's voices be heard.

The EU isn't perfect; it has some protectionist trade policies which deliberately keep other countries poor so that European countries can protect their own industries (using places such as Kenya as a source of raw materials but restricting their exports of processed goods to the EU). I don't even know enough about this, just that there are some incredibly unfair things happening because of EU decisions. Perhaps this shakeup will force people in Britain to look at the skeleton frame of how our society works, question how we set up new policies, and make better decisions. But it means trying to be aware, and I'm as guilty as anyone of keeping my head in the sand and citing overwhelming workload as my excuse to stay ignorant. We can't trust our leaders to know what's best, we have to ask questions and argue and fight for what's right, step by step. Twitter and Facebook won't be strong enough tools for that fight, we need to find more effective, non-violent methods.

We need to get creative. And friends in the book industry, isn't that what we do? We need to think creatively and ask questions. That doesn't mean all our work has to be serious and 'worthy'; sometimes humour has a lot more power to make people question the status quo than impassioned arguments. And not all our work will seem directly related to the cause; things such promoting Reading For Pleasure may mean we spend time helping kids to read (and make) comics about space cats or draw exploding toilets... that's perfectly valid! This isn't time spent away from building a better Britain, this is giving kids some building blocks to a life of literacy and educated questioning.

...And kids make find some of the building blocks of empathy and social awareness from things other than books - films, games, language exchange programmes, music, dance, volunteering at nursing homes and homeless shelters, after-school clubs, hiking, sports, activities - we need to accept that, too, and not think we're the big heroes in all this and that it's all about books. (Sometimes we book people do that.)

I guess what I'm saying is, I don't have all the answers, but whatever your Facebook feed is telling you, let's not write off our country and revel so much in the horror that we spread general feelings of powerlessness. Let's love our country, and love it in that active way that is a decision and a commitment as much as a feeling.
Collapse