Firstly, I’d like to thank Sarah for kindly hosting me on her fabulous blog for this leg of the #TommyVCancer blog tour. I don’t know Tommy Donbavand personally but I know I’d like him. From what I’ve heard he’s an all round good guy with boundless energy and passion for writing and entertaining kids. Recently he was diagnosed with cancer and has just undergone six weeks of treatment but it hasn’t stopped him blogging his journey. That’s because you can’t keep a good guy down. You can’t stop him writing and making others laugh and cry with his words.

If you haven’t read his blog, I urge to you do so. You’ll laugh (yes, laugh) and you’ll need some tissues too. At the moment Tommy can’t get out there to talk to kids, something he loves, so if you’d like to support him check out his website on becoming a patreon or buy his books. There are oodles of brilliant books to choose from. Talking brilliant books, here’s a review of one… 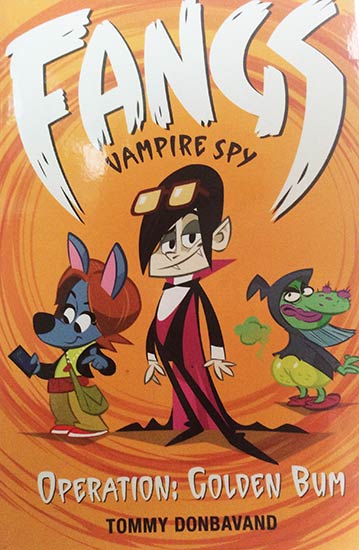 Okay, hands up. I love a pun, I love a bit of toilet humour and I love a golden bum! It was the name of this book that did it. There it was tooting to me above all the other Tommy Donbavand titles like a great big blow on a sparkly wind instrument. Golden Bum, I said to myself. After that I laughed. Oh how I needed to read a story like this. When I read the back blurb that said the whiffy wizard, the Great Disgusto, was holding the world to ransom I thought, yup funny! The next line about Agents Enigma and Brown sniffing out The Great Disgusto’s stinking plan before he let rip with his golden bum and blasted mankind into oblivion had me cracking up. Like I said at the beginning, I love a pun and there were plenty of them in this book, much to my delight. There were also many interesting characters that flew off the page like Milly O’Naire and Sir Hugh Jands. Yo yo there’s a rapping gnome too. His name is Hip Hop. He’s a rhyming gnome. No need to go home. He’s cool as you like. He might want to fight. He’ll bust yo’ face. So, bust his first. No that doesn’t rhyme, sorry it’s a rap crime.

Okay, sorry about that. I can’t rhyme half as well as Tommy does - back to the story. Ask yourself these questions:

If you answered ‘yes’ to any of these questions and even if you answered ‘no’ or ‘don’t know’ then Operation: Golden Bum is for you. Basically it’s for everyone. It’s like putting James Bond and a vampire into a blender and ending up with Fangs the vampire spy. This is the first book in the series and the story travels along at a pace and you’re carried with it as Fangs Enigma and his werewolf sidekick, Puppy Brown try to stop The Great Disgusto and his noxious fumes. I’m not going to give any spoilers because um… that would spoil everything but there is a lot of fun in this book. The writing is effortless and zips along and the story is easy to follow.

At the front there are Mick Harrison's character pictures, which is so lovely as I immediately felt connected to them. Inside there were illustrations every few pages. And I loved the little paw print at the end of each chapter. Little touches like that are so important. The beginning of each chapter there was a bigger illustration that really set the mood. I particularly enjoyed the illustrations that went over pages 134 and 135. I won't say what it is as it would spoil the end but it was funny.

To sum up, this story is just choc-a-block with much hilarity, jokes, word play, rhyming and general James Bond-esque (I just made that up) mayhem. Yes, it was the name of this book that hooked me to start with but it’s the story kept me on the edge of my seat and when I turned the last page I thought I’m going to miss that sharp-toothed Fangs Enigma and then I thought nah, I’ll just get all the others in this series. Yippee, more fun and farts* to be had! *Maybe not farts. Okay, maybe farts. I’ll shut up now.

To end the blog tour there will be a Twitter chat, hosted by Vivienne DaCosta (@Serendipity_Viv) and Michelle Toy (@ChelleyToy). This will take place on 30th June 2016 8-9pm and the hashtag is #tommyvcancer. 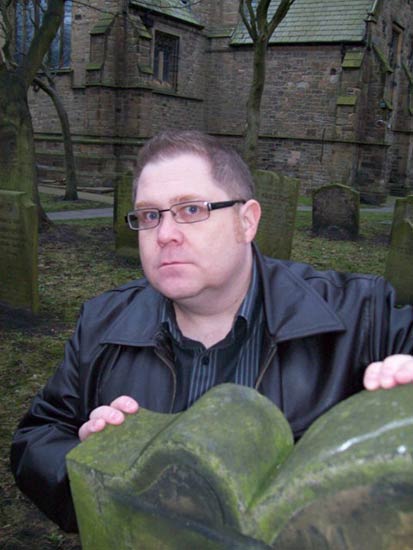 Tommy is the author of the popular thirteen book Scream Street series for 7 to 10 year olds, published by Walker Books in the UK and Candlewick Press in the US. His other books include Zombie!, Wolf and Uniform (winner of the Hackney Short Novel Award) for Barrington Stoke, Boredom Busters and Quick Fixes for Kids’ Parties (How To Books), and Making A Drama Out Of A Crisis (Network Continuum).

In theatre, Tommy’s plays have been performed to thousands of children on national tours to venues such as The Hackney Empire, Leeds City Varieties, and Nottingham Playhouse. These productions include Hey Diddle Diddle, Rumpelstiltskin, Jack & Jill In The Forgotten Nursery, and Humpty Dumpty And The Incredibly Daring Rescue Of The Alien Princess From Deep Space. He is also responsible for five episodes of the CBBC TV series, Planet Cook (Platinum Films).

As an actor, Tommy played the Clearlake MC in the West End musical Buddy: The Buddy Holly Story for over eight years, in addition to roles in the movies Zombie Love Stories (where he battled hordes of the Scottish undead) and Going Off Big Time (where he was beaten up on a bouncy castle). A veteran of pantomime, he has portrayed just about every comic character from Abanazer to an Ugly Sister. Tommy lives in Lancashire with his wife and two sons. He is a HUGE fan of all things Doctor Who, plays blues harmonica, and makes a mean balloon poodle. He sees sleep as a waste of good writing time.

Note from Sarah:
Illustrator bio: There isn't much information about Mick Harrison in the book or on the publisher's website; I think he's @Goldenengine on Twitter. But things are changing for the better; find out more about why illustrator credits are increasingly important at PicturesMeanBusiness.com.
Collapse