Hello, I'm back! I haven't blogged for awhile, so here's a peek at a Shark & Unicorn comic strip I had in the Funday Times awhile back: 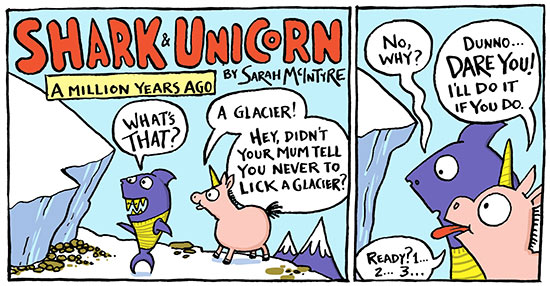 Nice and icy for summer: 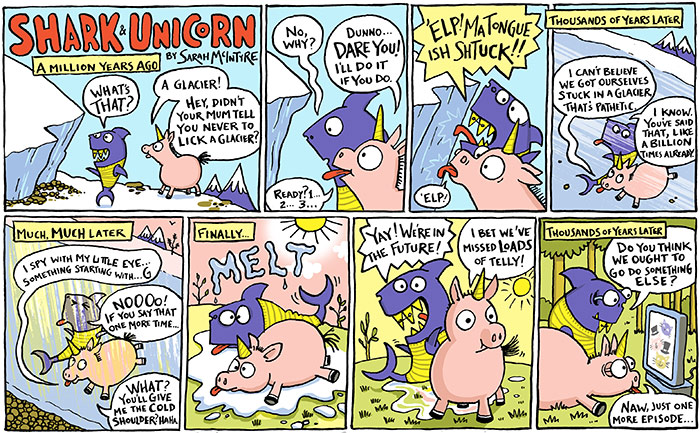 And I HAVE actually been on ice and looking at glaciers! (That's my little sister on the left, getting snow water for us to filter.)

I have loads to tell you about my trip to the Pacific Northwest but first I need to catch up on a zillion e-mails (because I basically ignored e-mail for two weeks). And do some roughs for my next picture book.... you can get a tiny peek at it in this photo Elissa Elwick just took of me in the studio. And here's a peek at freshly printed copies of her new picture book with Philip Ardagh which came in while I was away! We both have picture books launching this autumn (Little Adventurers for her, The Prince of Pants for me).

Speaking of which, I just saw that bookings are open for our Prince of Pants Cartoon Museum event in London on Sat, 24 Sept from 1-2pm! Definitely book tickets if you're interested (details on the website), as the workshop space only fits about 30 people, max. It should be rollicking good fun! 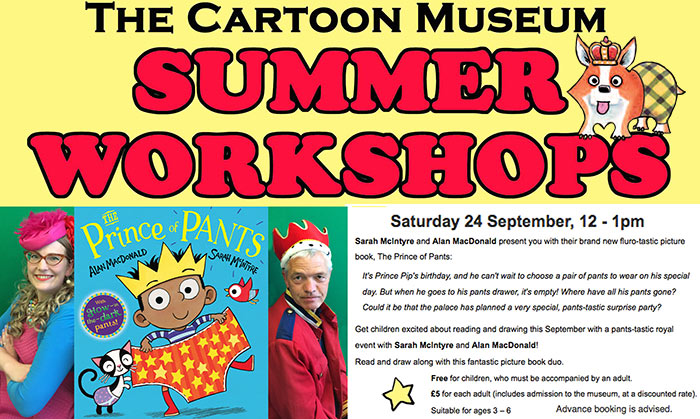 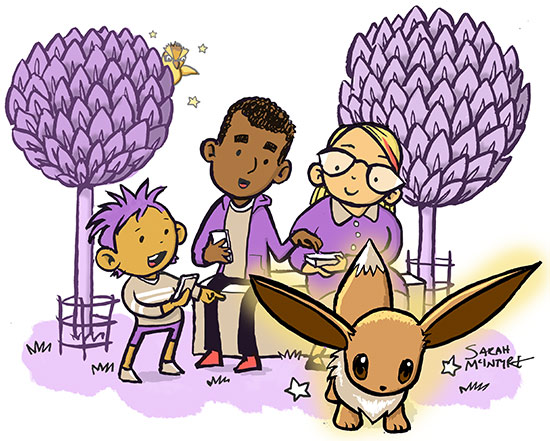 'YOU'VE BEEN IN THE HOUSE TOO LONG, KID. GO RUN AROUND OUTDOORS.'

To any book-loving kid, these parental words are torturous. 'But I'm right in the middle of a chapter!' I protested, age 10, at least a hundred times. Adults like to think of children enjoying nature. And sometimes as kids we do spot a beautiful butterfly or an interesting flower. Better yet, we find somewhere awesome where we can build a fort or dig trenches and flood someone's sand box. But anyone from the suburbs or the city can probably remember trudging to that local bit of concrete and grass known as the local park. Cast your mind back. It was DULL. Or if it was filled with less-than-friendly kids, worse than dull. Even as an adult, Greenwich Park is amazing, but my local park, well... I can't figure out how to use the artsy exercise equipment. And if I go running in it, I get cat-called and my body described back to me. It's not where I've gone for fun.

Guess what, my boring local park is now a major hub of Pokémon Go; there are magical creatures hiding behind every bush, beautiful rose petals falling from the sky and PokéStops where I can stock up on the little red and white balls I need to catch the wild Pokémon. Okay, you could say it's the sign of a mid-life crisis, and this Guardian cartoon by the brilliant Stephen Collins made me laugh:

Click here to read the larger version on the Guardian page

Catching the critters is some of the fun, but what's just as fun is seeing clusters of people in the park working on various Pokémon-Go-related things. Yesterday evening I sat on a bench next to a Lure (which is a temporary area circled off on the map with pretty confetti and rose petals falling on it from the sky, designed to lure in the wee beasties). And I ended up having a quite involved and lively conversation with the guy next to me on the bench, a black guy, about 20. And then a middle-aged white woman nearby with a little dog compared notes with us, and the hipster couple on a nearby bench called over a few game-related comments. I tried to think of previous instances when I would have ever started up conversations with these people. Maybe the lady with the dog, it's easy to talk to someone with a critter. But not the other ones. The young black guy told me about how we can team up for battle to defeat a 'Gym'; he and about nine other players got together and managed to defeat another team a couple nights ago and take the Gym. (We both happen to be on the Red team.)

We got on so well that I could totally imagine planning to meet up with him and other people in the park for battle, and it's so above-board and nothing to do with how I look... it felt rather wonderful. I suddenly realised that it's a great way to make local friends in the neighbourhood; it gives us something totally neutral to natter on about. And if I was dating, I'd much prefer to pick up people that way than by going to a bar. It wouldn't be dating at all, just playing the game, and it would give me time to suss out whether I liked people or not. And even if they didn't find me physically attractive, it wouldn't really matter, they'd still value me for my gaming skills and we could have fun together. I love how it brings together people from all ages, races and physical fitness levels, those things are kind of irrelevant.

I recently read a press release bemoaning how Pokémon Go is distracting children from reading books. But kids who weren't reading anyway aren't suddenly abandoning books, and kids who live in books, it gives them something to do outdoors that makes the real world feel a bit more magical and full of stories. As a kid, I would have adored making a zine about Pokémon characters, or drawing a comic about going out to catch them. And I would have devoured any comics about them that I could have found in my library.

One of the big differences of Pokémon Go to many other games is that it can't be played in the solitary confinement of one's bedroom. Its critters gravitate toward parks and public art, so the game invites adventure and real-life stories by getting us out, possibly even discovering part of our local area we didn't know about. Kids need stories in books, but they need stories in real life, too, interacting with places and other people.

The day after the game was released in the UK, I remember reading a Facebook post by a parent with an autistic kid who was flabbergasted by its impact: her kid had never wanted to go to the park, never talked with the other children. And suddenly he was begging to go to the park and happily chatting away with the other kids about catching critters.
Edit: an interesting article about a parent, her autistic son and Pokémon Go

I'm not saying Pokémon Go is the most awesome game ever, but if it's how the future might work, I rather like it. In fact, it's partly because it's such a silly game - any little kid could play it - that it makes the social side of it more fun: we can't take ourselves too seriously over it. While I was playing in the park, a suited businessman sidled by, obviously doing the same thing, and we grinned sheepishly - but rather happily - at each other. Perhaps it's just the early innocent days and it will get more intense and people will have to be more expert at it to have any street cred. But it's in a very nice friendly phase right now, and hopefully the company will figure out how to build on that and keep it going as the game develops. It's a fascinating study of people.
Collapse