One of the problems illustrators face in publishing careers is infantalisation. Illustrators often work on books aimed at children, so they're assumed somehow to be childish themselves. It doesn't help that many illustrators are too scared too speak up about ways the industry could be improved, for fear of being branded 'difficult' and losing future work; their voices and opinions as professional business people are lost in discussions swirling around the publishing industry, and perhaps some people read this silence as naivety, immaturity or lack of professionalism.

So I was very pleased when I got an e-mail from Nigel Roby, owner of The Bookseller, our influential trade magazine that helps sets the tone for how non-illustrators in the industry talk about illustrators. He wrote to say they were setting up a new Illustrator of the Year Award, as part of their annual British Book Awards ceremony (also known as 'The Nibbies'). It's not the same as other illustrator awards: all the other ones I know of are based on judges' subjective appreciation of an illustrator's artwork, or based on votes by children, while this one's a business-focused award based on the illustrator's selling power. This kind of evaluation is standard in most industries, but something I'm not aware illustrators have ever had.

Of course our jobs aren’t ONLY about making money. No one likes to think of illustrators as purely money-grubbing. But if no one in business is aware that illustrators make publishers any money, a lot of illustrators won’t be taken seriously, credited or paid appropriately. And we'll get less good UK talent, and fewer diverse voices, as illustrators who can't make it financially leave the profession, or never even start. We need to be held up in the same way as other business people in the industry if we expect to be treated as professionals. So this is a positive move; thank you, Nigel and The Bookseller team! This article's not behind a paywall, so you can read the whole article online here. And here's a link for the award's criteria. 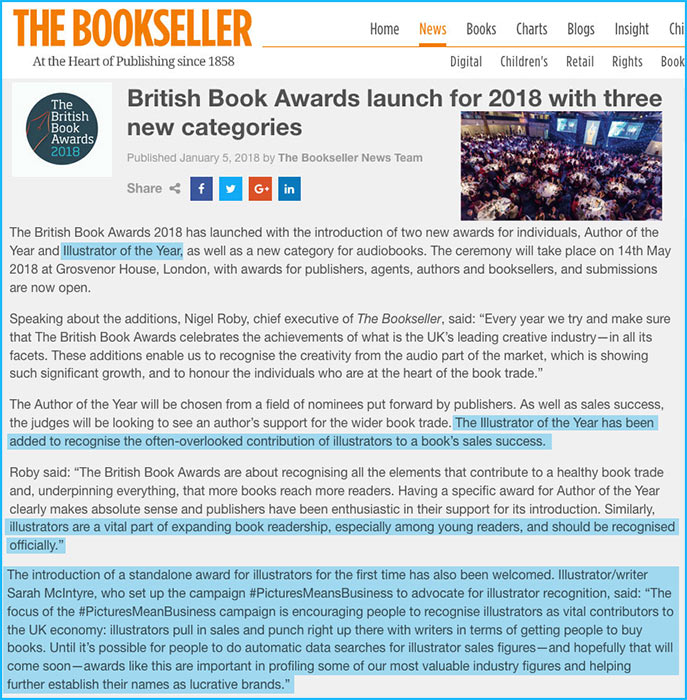 In the article I mention illustrator sales data. Illustrators don’t talk much about data issues because we don’t subscribe to Nielsen; it’s tricky to gauge the impact of something we don’t use or see. But the information they give booksellers (and journalists and other people) has tremendous impact on which of our books will or won’t appear in shops. We need to be aware. You can read more about these issues in this #PicturesMeanBusiness update I gave in December to the Association of Illustrators for their website, but here are some key bullet points: 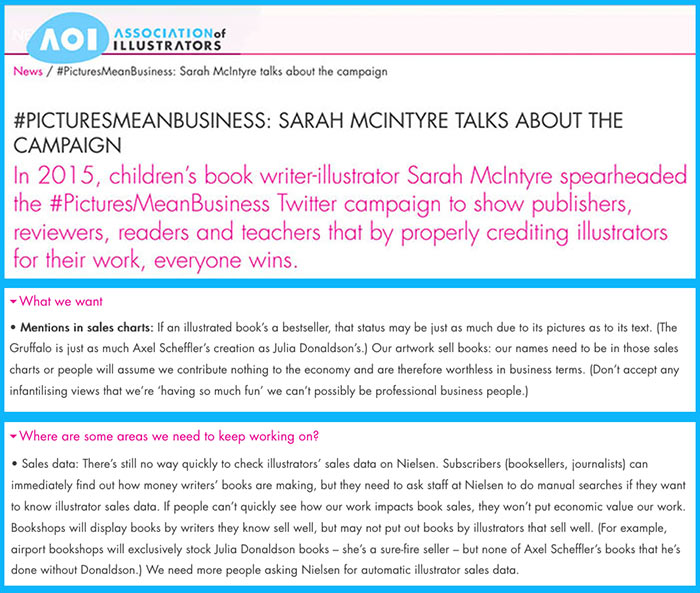 You can follow Nigel Roby on Twitter - @NigelRoby - The Bookseller - @thebookseller - and keep an eye on the awards on the #Nibbies hashtag. And big cheer to Tamsin Rosewell - @autumnrosewell - and Judy Brook from Kenilworth Books - @KenilworthBook - who sent Nigel a letter recommending the award. Thanks for your support for illustrators!
Collapse