The Legend of Kevin, the first Reeve & McIntyre book in the Roly-Poly Flying Pony series, is officially LAUNCHED! Big thanks to Waterstones Covent Garden who last week hosted the party! 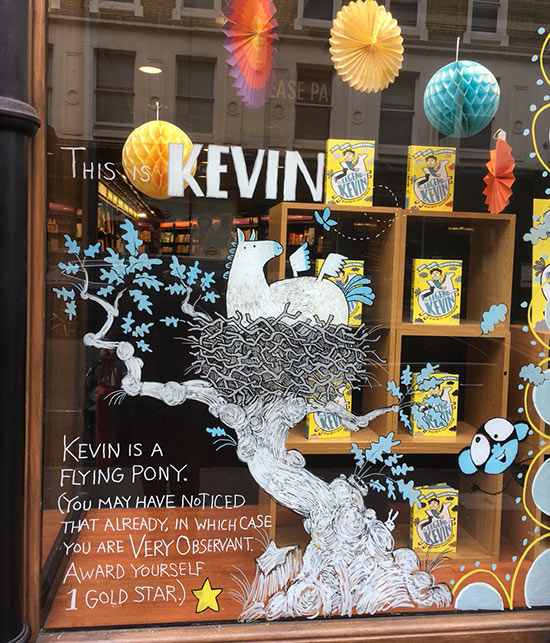 The evening before the launch, my co-author Philip Reeve and I climbed up into the window with our Posca pens and got busy drawing, while tourists and theatre goers strolled by. By the time we were finished, the sun had set and it was hard to make our what we'd drawn, so we were keen to have a fresh look the next day. 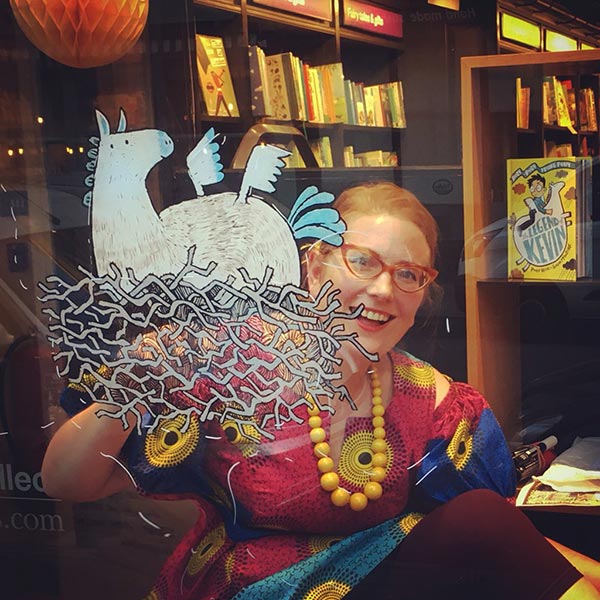 And here it is, our Kevin window! And a rather enormous hat I made, and a dress Esther Marfo made for me. And... what is that, is that a real 3D Kevin?? 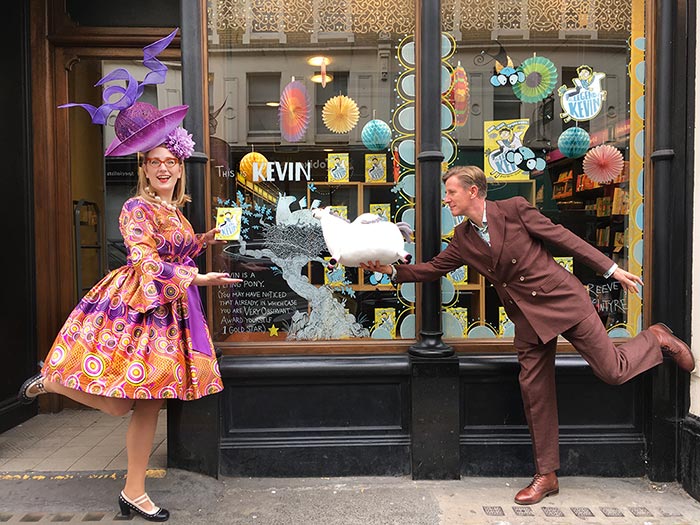 It is! A very squeezable, lovely, roly-poly flying pony! 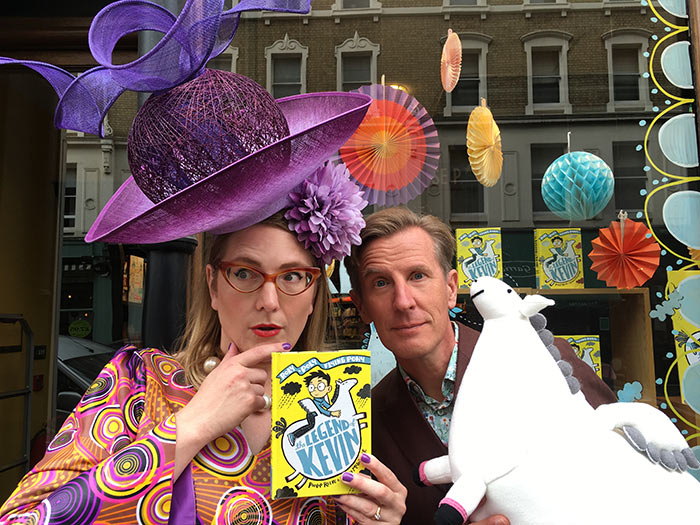 Here's artist Chloe Applin, who created three Kevins for Philip, me, and Oxford University Press. We'd been following her progress on her Instagram account, but launch day was the first day I got to meet Kevin properly, which was rather thrilling. 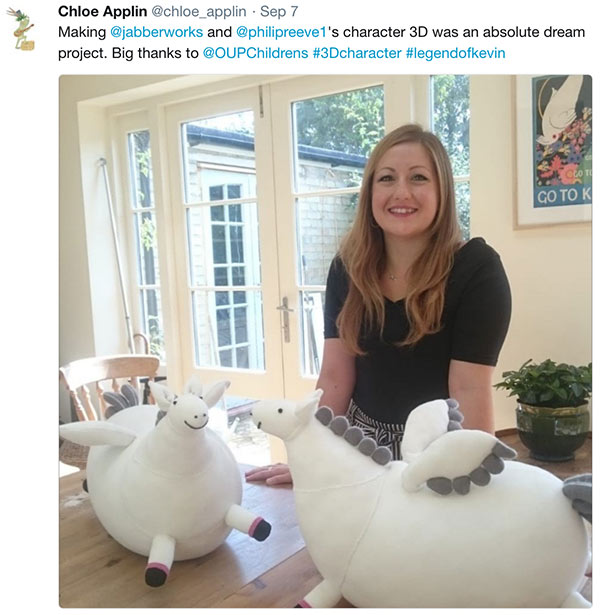 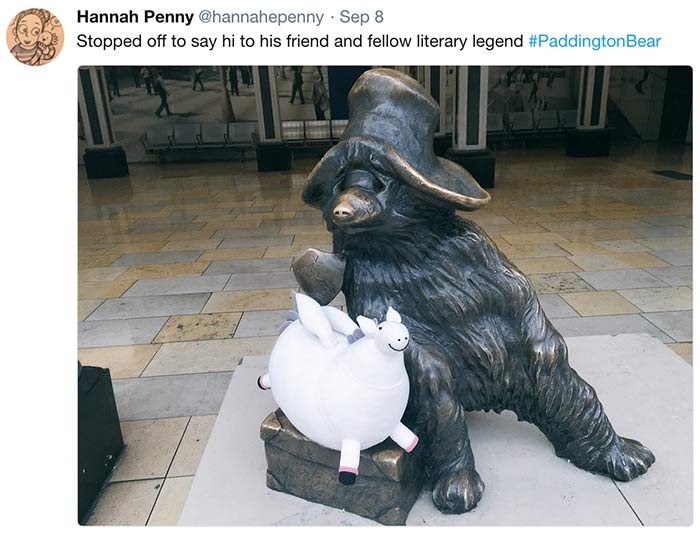 Two of our most exciting guests were Nick and Alec, who had come all the way from the Keswick area in the Lake District to London, just for the day!! And Alec brought this lovely card: 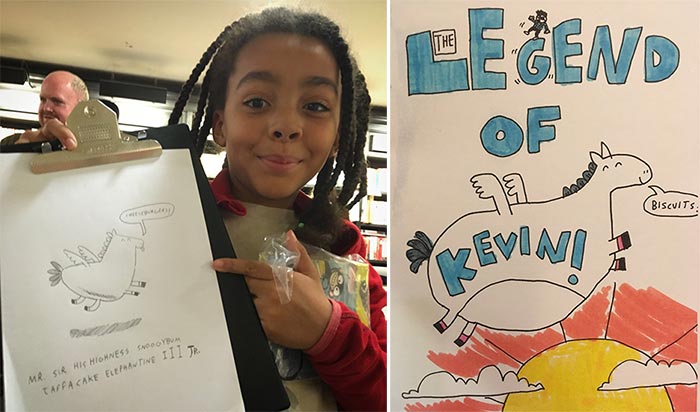 Late one afternoon, last week, my co-author Philip Reeve and I were puzzled to find outselves once again in front of a giant custard cream, this time in Clapham, south London. What was going on? Why were we not sitting at our desks, churning out another book? 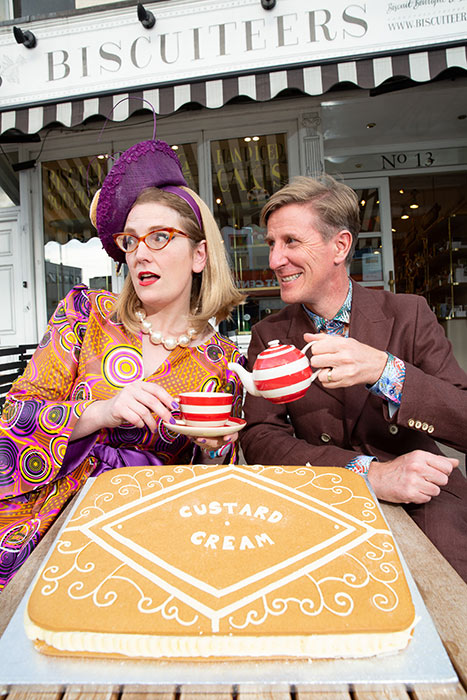 The answer did not come straight away. First our excellent Oxford University Press publicists Emily Ferguson and Hannah Penny took us to the headquarters of Fun Kids Radio, where Philip lounged elegantly and I wondered how I was going to play the ukulele on air and sing while wearing those big padded headphones. Fortunately I was highly caffeinated, which seemed to do the trick. And as soon as we plonked our big fluffy Kevin in the middle of the recording table, presenter Bex was won over and we had a good chat.

Huge thanks to OUP, the Biscuiteers, Dave, Chloe Applin for her Kevin sewing skills and everyone who came along for our Custard Cream biscuit party! Kevin says he's so full now that he's never eating biscuits again, which we all know is a nice little bit of Fiction. 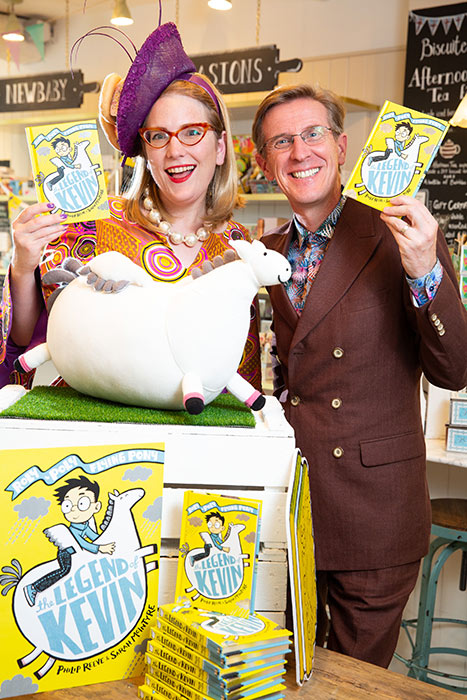 You can find out more about The Legend of Kevin and learn how to draw Kevin on my website, and buy a copy from all good bookshops, including Foyles, Waterstones and Nottingham's Page 45.)
Collapse